On April 30, 2019, Disability Rights Pennsylvania (“DRP”), the nonprofit organization designated as Pennsylvania’s protection and advocacy agency for individuals with disabilities, filed a federal lawsuit on behalf of youth with mental health and developmental disabilities who suffer physical and emotional abuse by staff while living at state-run Youth Development Centers (“YDCs”).  Although the YDCs, which are operated by Pennsylvania’s Department of Human Services (“DHS”), are touted as providing “state-of-the-art treatment, care and custody services to Pennsylvania’s most at-risk youth,” approximately 70% of whom have disabilities, staff at the YDCs violently assault, provoke, intimidate, terrify, and humiliate youth with disabilities, preventing them from obtaining the rehabilitation and treatment that they are sent to YDCs by juvenile court judges to receive.   DHS and its officials and employees are aware of this abuse and have allowed it to persist unchecked to the grave detriment of these children.

The Complaint includes 11 examples of abuse perpetrated under the guise of “restraints” on youth between the ages of 13 and 18 from counties across the Commonwealth:

“Staff do not have unlimited discretion to restrain youth.  Under state law, physical restraints are permitted only when the youth is in danger of self-harm or harming others and only when less restrictive methods to calm and de-escalate the situation are unsuccessful,” said Kelly Darr, DRP’s Legal Director. “Otherwise, if restraints are used as punishment or to physically gain compliance, they are illegal and constitute abuse.”

These rules are violated with virtual impunity by YDC staff.  As shown in video footage, youth with disabilities are violently restrained for minor behavior related to their disabilities, such as fidgeting, speaking reflexively, seeking time or space to process emotions, not walking fast enough, shrugging, not being able to write clearly, not being able to clearly communicate, not being able to finish tasks quickly enough, not being able to display expected social behavior, and not being able to stop talking on command.  Instead of de-escalating youth as required, YDC staff intentionally escalate them by yelling, poking, and gesturing in their faces.  Staff crowd around youth in anticipation of a restraint, sometimes pulling kids out of chairs or tackling them to the ground, with five staff members piling on a child while an equal number of staff or more stand around to watch.  These abusive incidents last many minutes, sometimes over an hour, and some youth with disabilities are subjected to more than a dozen of them while at the YDC.   Youth are often restrained by their counselors, the very people who are supposed to provide mental health treatment to the youths.  Some of these abusive restraints are documented on video.  For many others, YDC staff intentionally conduct restraints in “off-camera” locations.

YDC staff conduct illegal restraints to cause pain.  Arms and shoulders are pulled back while the youths faces are pushed toward the floor.  Dangerous and illegal prone restraints are used.  One restraint video showed staff pushing an impact cushion over a youth’s face for more than 10 minutes. Youth are injured, including busted lips and sprained shoulders.  These illegal restraints also cause emotional harm. These youth, who often have already experienced trauma, are then re-victimized by being physically abused or by watching peers suffer this abuse.

YDC staff falsify incident reports to provide post-hoc justification for the physical abuse.  These false and misleading reports are provided to the youth’s probation officer and judge as indication that the youth is not adjusting well to treatment, thus delaying the youth’s discharge.

To compound this situation, YDC staff taunt youth with disabilities, calling them “dogs,” “fucking dummies” and state that they “hate stupid people.” A youth with Tourette’s was told by YDC staff to “shut the monkey noises up.” A youth with a speech impairment was laughed at by YDC staff when she could not properly pronounce certain words.

“DRP filed suit to protect youth with disabilities from ongoing abuse and illegal restraints now and in the future and to ensure that these youth are provided with the treatment they are entitled to receive,” said Darr.  “Many of these youth are terrified of speaking out.  Youth with disabilities at the YDCs report feeling scared and unsafe in the environment of abuse that pervades the YDCs.”

This lawsuit is brought against DHS officials and employees and asserts violations of Title II of the Americans with Disabilities Act, Section 504 of the Rehabilitation Act, the Fourteenth Amendment to the United State Constitution, and the federal statutes that authorize DRP to investigate the suspected abuse or neglect of individuals with disabilities.  The lawsuit was filed in the United States District Court for the Middle District of Pennsylvania.  The complaint is available on DRP’s website, www.disabilityrightspa.org. 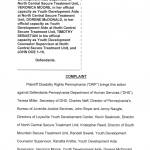 My Time In An Institution