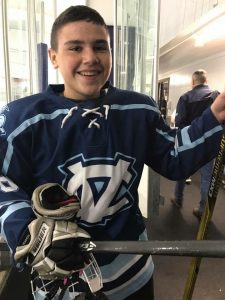 Disability Rights Pennsylvania (“DRP”) successfully represented middle school student J.G, a child with learning disabilities and attention deficit hyperactivity disorder, in an appeal of the decision of the Pennsylvania Interscholastic Hockey League (“P.I.H.L.”) not to modify its age requirements so that J.G. could play on his middle school ice hockey team alongside his classmates.  Due to his disabilities, J.G. had an additional year of kindergarten, which made him ineligible to play middle school hockey by 28 days.  J.G.’s parents requested that the P.I.H.L. grant J.G. an age waiver so that he could play middle school hockey, a reasonable modification under the Americans with Disabilities Act, but their requests were denied without explanation.  After DRP contacted USA Hockey, the sport’s governing body, and participated in an administrative hearing, the P.I.H.L. reversed its earlier decision and granted J.G.’s request for an age waiver.  J.G. was on the ice the following day and, judging from the photographs, was very happy with the decision!

Back to Spotlights On Our Work

OTHER SPOTLIGHTS ON OUR WORK